I read so much more on my Kindle!

Liars - that’s what I thought. Either they were lying, or were tricked into thinking they’ve read more. Well, I’ve had mine for just about a month now, and I feel the same way. So either I’m lying, have been tricked, or I really am reading more now that I have a Kindle.

I was hesitant to get a Kindle for two main reasons:

Fiction and the Lending Library

So, why did I get a Kindle?

My wife got me addicted to The Hunger Games series, and it got to where we were both reading the last book in the series, Mockingjay.

We usually read at the same time - just before going to sleep. So I thought about buying an additional copy, but then I noticed this thing on Amazon called the Kindle Owners Lending Library. It’s only available for Kindle owners. I.e. you can’t get books on your Kindle for iPhone or Kindle for Mac.

Mockingjay was available for free in the Lending Library. I had some Amazon gift cards, so without much thinking, I decided I needed a Kindle.

So I bought one. And I finished Mockingjay the same day I got the Kindle.

The Hunger Games books are good. So good they’re making a movie out of’em. So maybe that’s why I read the last one so quickly onthe Kindle. It’s not that the Kindle is magical or anything, right?

But then I noticed something else. I discovered that you can send blog posts to your Kindle.

Before I had a Kindle, I had three methods for keeping up with posts I wanted to read later.

So, I’d have three different places to check when I had time to do some reading.

Readability is practically integrated into every piece of software. Now whether I’m in Google Reader, Twitter, Tweetbot (iPhone), or Google Chrome, I can send the blog to my reading list on Readability.

And with Readability, I can send longer posts to my Kindle very easily. Now, every night just before I go to sleep, I can pick up my Kindle and read a post or two. It’s awesome.

So, the Kindle’s great for fiction and can be great for long blog posts. But what about those software books that include diagrams, charts, and code examples?

I purchased Clean Code for my Kindle and I’m about half way through with it right now. However, I’ve been reading it mostly on Kindle for Mac. Of the 11 chapters I’ve read, I’ve read only about 2 or 3 on my Kindle. I was always opposed to reading on my MacBook, but that was when I would try to read books in .pdf format. The .mobi format works extremely well: 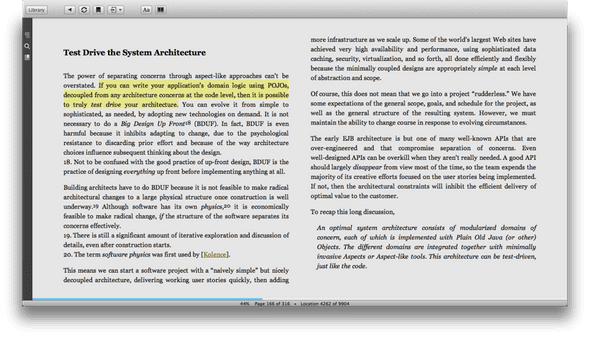 The major drawback to Kindle books is that they have a $0 resale value.

However, I’ve found Kindle books to be (for the most part) dramatically cheaper than their physical counterparts. I can get two Kindle books for the price of one hardback. I think this makes up for the lack of a resale value.

I’m still uncertain of how I will like the Kindle (and the idea of digital books in general). I’ll have to try a few more books before I’m certain that I now prefer digital over physical.

I think there’s still a place for hardback books in my library. Reference and catalog books, like GoF’s Design Patterns and Fowler’s PoEAA are still valuable to have in an easy / quick reach. However, there’s also a lot to be said about a digital book that is searchable.

So for now I’m defaulting to Kindle editions. I’m selling all of my paperbacks and getting Kindle versions. Hopefully I won’t regret it.