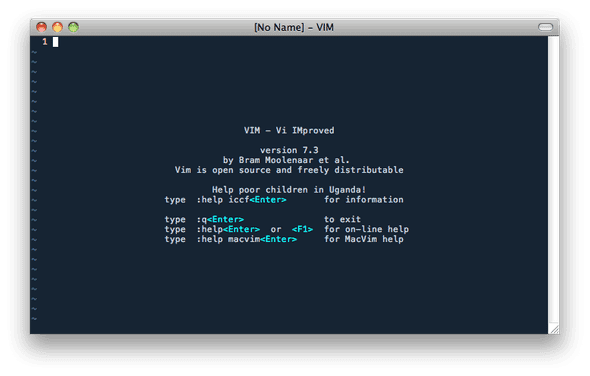 I plan on diving into Ruby on my Mac soon and was in need of a good editor. I’ve been wanting to use TextMate, but with a $50 price tag (and my recent vow to only use legal software) I was hesitant to go that route. It’s not that I don’t think it’s worth $50, I just have a very hard time spending money on software when there’s free alternatives.

Vim’s been mentioned several times by developers across all development platforms as their favorite editor. What I like best about it is that it’s free.

So I downloaded MacVim and stumbled upon Vim Recipes which I’ve been reading through for a couple of hours today.

I’m hoping that I’ll stick with it and use it. I think I’ll like it; I already use most of the Vim-inspired bindings that are available in Gmail, Twitter, Google Reader, so I’m already familiar with the basics. What I believe is the biggest problem for me is that Vim bindings are not universally available. Sure, Vim can be installed on any environment. However, it won’t be available on a Windows server that I’ve RDPed into and only has Notepad installed. I’ll have typed 100 jki’s in the text file before I realize what I’m doing.

My brain and fingers currently have Up, Down, Left, Right, Ctrl, Shift, Cmd, Alt combinations (that are universally available) ingrained for manipulating and selecting text. Vim isn’t available in comment boxes in my browser. Microsoft Word doesn’t close when I enter :q. I understand there’s probably plugins that enable all this, but that’s not what I’m looking for; that’s not universal. I don’t want 30 Vim plugins to be installed on every machine I use.

But here goes. In a couple of months I’ll either be a jjjk^iHelloWorld master or I will spend $50.

Does anyone have any suggested resources (other than Vim Recipes) for learning Vim?