Cloud Backup is a Necessity

You need to backup anything that’s dear to you “to the cloud”. Simply backing up to another disk in your home is not good enough. While that does solve the problem of a disk failure, it does not solve the problem in the event of:

Last year I started getting serious about backing up my personal photos and videos. I wired my old 1 TB external disk to my ASUS router to enable storage over our home network. Then I purchased Arq for Mac to backup nightly to Amazon Glacier. This solution worked, but it was SLOW. So I began searching for a faster and ultimately better solution.

In this post I’ll detail my current setup that involves the following tools and services: 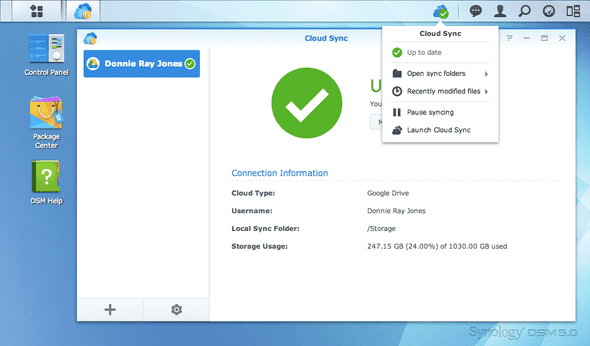 Earlier this year I purchased a Synology NAS and a Western Digital 3 TB Harddrive. I had been saving up for a new lens for my Nikon DSLR, but decided to redirect that savings into a better backup solution. I had heard about Synology as a way to solve the space problem of these fast, small SSDs that are commonplace in laptops. The Synology software is excellent and solves the problem perfectly. I was worried about network speeds, but on a wired Windows 8 laptop I get 90-100 MB/s. I don’t achieve those speeds on my Macbook over wireless, but it’s sufficient for use with Adobe Lightroom (which creates a local cache of preview images). There are apparently problems with the latest version of Mac OS X and Samba, but in my experience it is still good enough.

I didn’t know about all of the features that I’d be getting when I purchased a Synology NAS. I won’t list them all here, but there are tons of built-in features and add-on packages to turn this little box into a super server.

With the Cloud Sync add-on package you can very easily sync files to Google Drive and/or Dropbox. There’s also a package to backup to Glacier on a schedule, if you prefer that sort of setup. 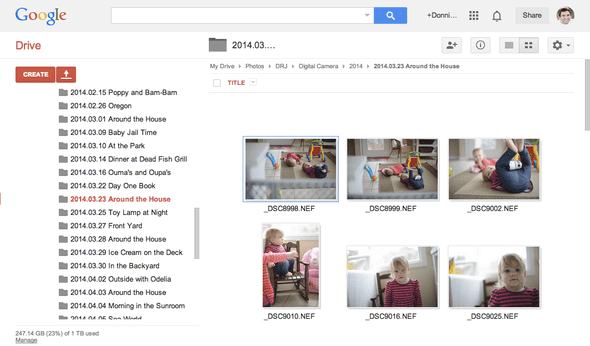 Just in time for the arrival of my Synology NAS, Google slashed prices on Google Drive. These prices matched what Amazon is offering with Glacier and are 1/10 of Dropbox’s prices. Technically, Glacier is still cheaper - you only pay for the space you use, whereas with Google you pay for storage in blocks. But the experience with Google Drive is worth the few extra dollars per month.

My previous backup solution to Amazon Glacier was sufficient but it was not very easy to work with, and the backup only performed on a schedule (i.e. nightly).

With Google Drive, uploading begins immediately and it’s much, much easier to manage the cloud storage. Google Drive’s web interface is excellent, and I actually prefer it to Mac’s Finder for browsing through my photos and videos.

The best feature of Google Drive is the availability of your files no matter where you are. With Synology, you have the ability to VPN home to access your files, but with Google Drive, it’s not even necessary. Just pull up the app on your phone or visit the website on any desktop computer. Want to share some photos? Just a click away - no need to reupload. 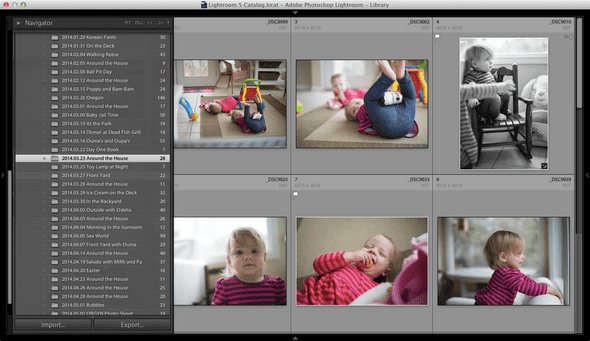 Adobe Lightroom is the perfect companion for photos stored across the network. Lightroom generates previews for lightweight local storage while the RAW image files remain on network storage. Currently I have a catalog with over 17,000 photos and it’s snappy. I have Lightroom create previews on import from the camera, and this process does take a few minutes. But once it’s complete your images are on disk, uploading to Google Drive, and ready for editing.

This solution has worked well for me. My photos are backed up and it doesn’t interfere with my workflow for editing and it’s pretty much instant and automatic. If someone breaks into my home and steals my laptop, my Synology NAS, and my camera, I’ll still be able to access my files on Google’s servers.

If you have any questions about my setup, Google Drive, or the Synology NAS let me know in the comments.

Back in August Dropbox dropped prices to match Google Drive. All of my personal items are in Dropbox so I decided to switch from Google Drive to Dropbox for the backup. It’s pretty simple, but I did have to upload all the photos again to Dropbox. If you do the switch as well, just make sure to get everything in Dropbox before you remove them from Google Drive.

Note: Dropbox is also actually cheaper than Google Drive, if you pay for a year in advance for $99.

So, couple of updates since my last post. Synology recently released a new version of their software and Amazon made a big announcement about unlimited photo storage.

Synology recently released DSM 5.1 which has the ability to do selective sync (among other things). I’ve configured mine to only sync my Photos and Videos which are exclusively stored on my NAS: 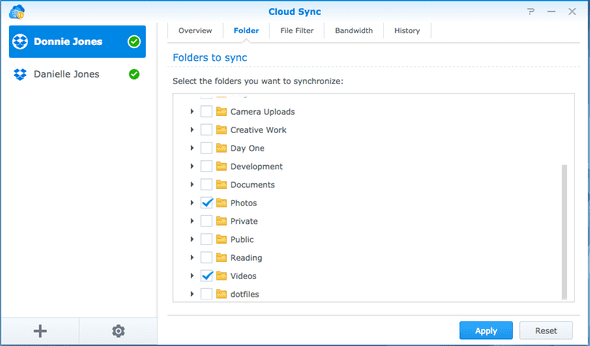 So now, instead of having my entire Dropbox folder duplicated on my NAS, just the Photos and Videos folders are there: 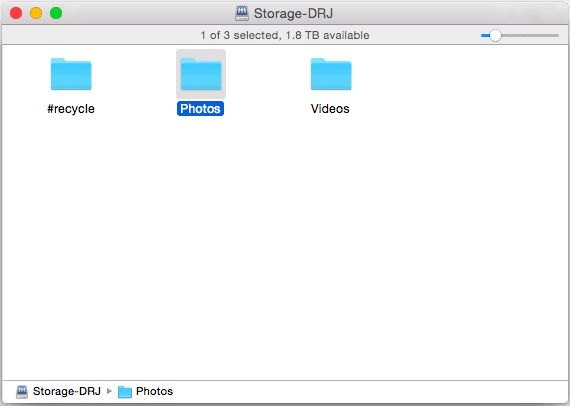 Also new to DSM 5.1 are file filters, a maximum file size setting, and a maximum file history log size. I think the file filters are pretty good by default. It should get your RAWs and JPEGs, just double check it to make sure. I’m not sure what changing the “Max number of records in history log for each linked account” setting does, but I set it to the maximum value of 100000.

On November 4th Amazon announced Prime Photos which means free unlimited storage for your photos. This is only for personal photos apparently, which covers me since this is just a hobby (sorry professional photogs!)

Prime Photos is a part of Amazon Cloud Drive (which I didn’t even know existed until this announcement). Sadly, it is not one of the online services that Synology currently integrates with in the Cloud Sync app. I reached out to Synology about the Amazon Cloud Drive support and got this response:

Thank you for your inquiry.

I will certainly pass your request along to our developers for consideration.

Which seems like a generic response. However, Synology did respond to the request for selective sync, and I bet this will eventually come about. There’s a topic on the Synology forums if you’d like to leave a comment which might help provide motivation for Synology to add it.

I’ve recently setup a better wireless configuration and thought I’d share. I’ve purchased an Apple AirPort Extreme and placed it in the room where I do my primary photo editing. It’s wired (over a Gigabit network) to my main ASUS router that’s on the other side of the house, upstairs. My Macbook Air is the 2011 edition, so it doesn’t take advantage of the 802.11ac speeds offered by the new AirPort Extreme, but I of course have plans to upgrade my Macbook in the future, and will be able to take advantage of those speeds then.

My Macbook Air 2011 has 802.11n WiFi, and here are the speeds I’m actually getting when copying files from my NAS to my Macbook over wireless. 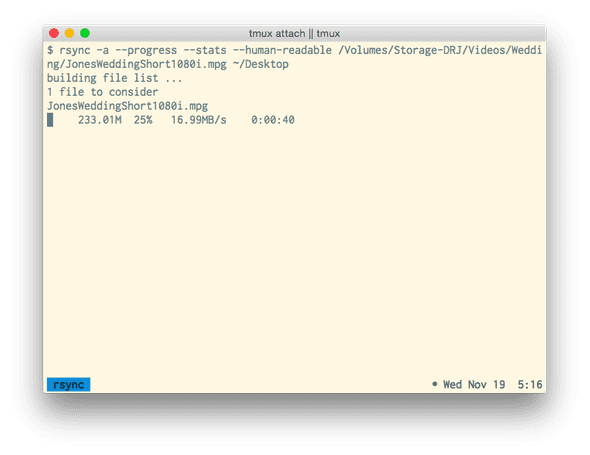 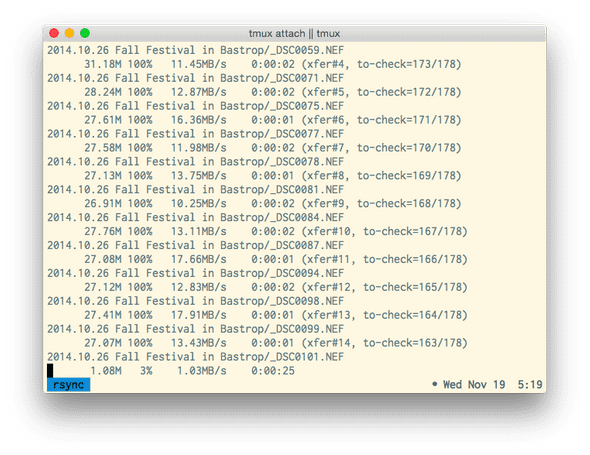 I saw it peak at about 18 MB/s which is not terribly bad, and in fact, feels pretty quick. It took less than a minute to copy the 1GB video.

I’d really like to see what speeds I get on a Macbook with 802.11ac. I’d recommend the Airport Extreme if you’re working on a Mac.

Here’s some links to all the equipment I’m using.